The Eye Spy Podcast series, which focuses on the work conducted by private investigators, includes an episode where IFW Global Chairman Ken Gamble is interviewed about his career breaking high-profile cases involving cybercrime, fraud, money laundering and much more.

The series has been produced by News Corporation Australia and promoted across the company’s major metropolitan publications throughout Australia.

In episode 7 “The Hunter” airing on September 27, 2021, Ken gives further insights into one of his most recent successes; chasing down notorious conman Peter Clarence Foster, who he saw arrested by Police in Port Douglas, Queensland.

The arrest came after Ken shadowed Foster in the area for a month, while working on behalf of a client who had been duped by the criminal into investing around $2 million into a fake sports betting company.

Foster has since gone on the run again, cutting his tracking device from his ankle and failing to show for a court appearance.

The podcast delves into Ken’s past, exploring his motivation for undertaking a sometimes dangerous and highly pressurised career.

It takes a lot of planning and attention to detail to break complex cases run by cunning criminals such as Foster, and the IFW Chairman’s background points to many clues about why he’s become a preeminent Australian investigator.

Ken joined the Queensland Fire Service in 1984 as an Auxiliary Fireman stationed at Noosa Heads on the Sunshine Coast.

That was then followed by his enlistment in the Australian Army Reserve’s Ninth Battalion, Royal Queensland Regiment, as an Infantry Soldier in 1985.

All three professions have helped shape his skills and ability as an investigator, while also steering IFW Global that deals with highly sensitive cases and information.

There was even a stint acting in the popular Australian crime drama, Water Rats, filmed around Sydney Harbour, where no doubt his undercover techniques were honed.

DRIVEN TO GET RESULTS

“I moved in New South Wales in late 1987 and within a few months I was recruited into the world of private investigation,” Ken recalls.

“In April 1988, I joined a company called Websters Investigations based in Sydney. Websters was one of the oldest private detective agencies in Australia at that time. They were contracted by the GIO (Government Insurance Office) to undertake investigations into organised insurance fraud such as third-party accident claims, and worker’s compensation schemes.

“My work in the early days was all covert physical surveillance, following and profiling insurance cheats from all walks of life, to film their activities. I conducted over 50 surveillance operations alone in the Griffith, Riverina region, by 1991. I was part of a 10-man surveillance team targeting various Italian groups who were cheating the insurance companies out of millions. These were high risk operations as many of the Italian families we were watching were later named in the Royal Commission into drug trafficking. I really loved the work, it was exciting, challenging and rewarding. I knew this was what I wanted to do for the rest of my life.”

A key attribute for a top investigator is patience; the ability to stay focussed on a subject or a target to get the desired result, no matter how long it takes. Ken’s time in the Army Reserve taught him how to be a meticulous planner and wait for the right time to strike while staying in the shadows.

“Experience counts for everything as an investigator, sometimes we would wait for days for a subject to move and then lose them in 30 seconds. I don’t enjoy working on a case and not getting a successful result for a client, I have always been results driven,” he says.

“My ability to serve others and offer my skills to those who need these types of services, has been a major driving force in my work. I love the feeling of getting results, whether it be catching a fraudster, solving a missing person case, or tracking an international fugitive.

“I love the freedom of this work, it always takes me to different countries, many different cities, I get to meet so many different people from different walks of life. I also like working alongside so many different law enforcement agencies, getting to know how criminals operate in different cultural settings, and how to solve crimes in international jurisdictions.”

Casting his mind back to 1988, Ken remembers an era of simpler times when technology as we know it today was in its infancy.

“There was no internet, no mobile phones, very little tracking technology and not even much CCTV around the community. I have witnessed a global transformation during my career, from one extreme to another, the growth of digital media, the expansion of the internet, an explosion in technology-based crime, incredible tracking technology, facial recognition, and now the prolific growth of cryptocurrency scams across the world,” he explains.

“Crypto scams are now a multi-billion-dollar criminal enterprise which is making many crime groups extremely wealthy. The evolution of cybercrime from day one has been incredible and is so rapid, that many governments are struggling to understand it, let alone investigate it. I have always been a huge advocate of helping governments and law enforcement collectively work together to solve cross border cases. This works well in most serious crimes but not large-scale financial crimes such as investment fraud, which is still one of the lowest risk, high profit crimes in the world.”

Some cases have led Ken to meet heads of government, such as a multibillion-dollar fraud and money laundering case against the Sri Lankan government resulting in two private meetings with the 7th President of Sri Lanka, Maithripala Sirena, at his Presidential Palace in Columbo.

“That was truly an amazing experience. I was assisting the government and their financial crime police to track billions of dollars stolen from government purses and allegedly laundered across the world by a former political party,” Ken says.

Over the past decade Ken has been focused heavily on major cyber fraudsters, especially those operating overseas but targeting Aussie victims. Australia is a rich haven for the scammers as there is no deterrent by law enforcement.

“I have busted some major crime groups operating boiler rooms in the Philippines, resulting in several law enforcement awards by their Anti-Cybercrime Group. The Philippines police are unique as they welcome outside experts with open arms if they can help solve complex financial crime cases. I was very proud to have worked alongside so many great cops in the Philippines where I lived for 2 years,” Ken explains.

“Of course, when I talk about major fraud cases there a few more media worthy than Peter Clarence Foster, arguably the greatest con man Australia has even seen. A seasoned and ruthless criminal who has used fraud to fund an incredibly lavish lifestyle at the expense of hundreds of aggrieved victims across the world who he’s left in financial ruin.

“He’s consistently outsmarted law enforcement agencies for over three decades now and is still on the run to this day. I have been intermittently investigating Foster for almost a decade and hunted him down several times, resulting in spectacular arrests that were filmed by the media in Byron Bay in 2014 and Port Douglas in 2020. Who knows, I might get lucky again although I suspect he’s gone deep underground now after Queensland Police issued an arrest warrant earlier this year.”

HIGH STAKES AND A MURDER PLOT

Foster was the first fraudster who felt the immense pain of Ken’s relentless pursuit of justice. Foster has been jailed three times, following Ken’s investigations, but each sentence was minimal and an embarrassment for our justice system. But as a tenacious investigator, Ken was never going to let him get away with defrauding millions from hard working mums and dads all over Australia.

“But when you get in between Peter Foster and his money, things can turn deadly very quickly. In 2015, Foster tried to hire a hit man to have me murdered in the Philippines where I was living at the time. His plot was blown after an informant leaked information about the murder plan,” Ken recalls.

“The kill plot was foiled, and his homes raided, but no charges ever laid. Foster is not the first fraudster to try to have me killed. I had regular death threats in the Philippines, and it took a lot of work and planning to navigate the death threats and still go on to arrest the criminals involved. This took my job to a whole new level, but I was never willing to give up or give in. My client’s work is never done until I finish the case.”

Life as a prominent investigator can be dangerous but it’s certainly never dull! 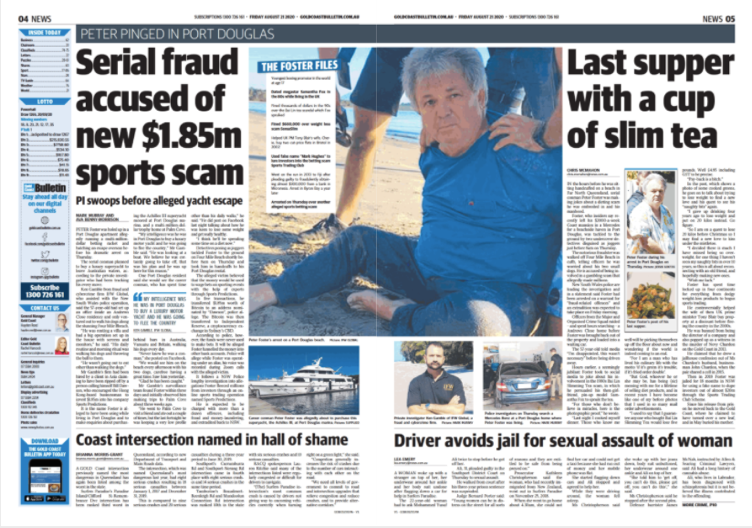 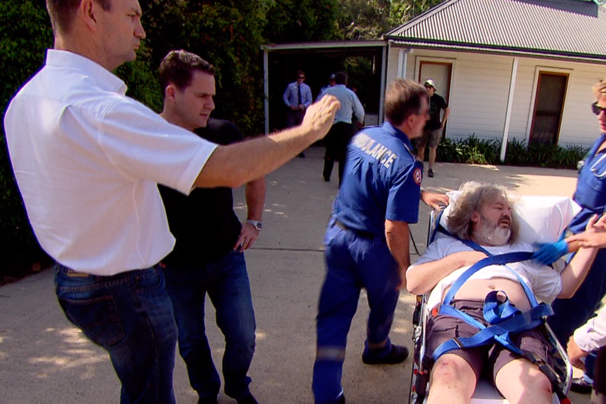